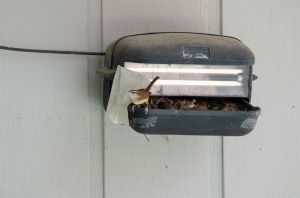 wren nesting in in a bug zapper

We’re spending a wonderful week in St. Simons, Georgia!  We were delighted to find Carolina Wrens nesting in a defunct bug zapper (resourceful parents).  But we were worried because pressure washers and painters would be arriving any time to spruce up the area.  Delaying the work wasn’t an option, so we consulted some bird experts and decided to attempt moving the house out of harm’s way.  This was a last resort option and we would never move a nest except in an extreme situation and without expert advice.

midway through the relocation project

We did the relocation step-by-step over the course of a couple days allowing a few hours pause between moves.  We monitored closely to make sure the parents continued regular feedings.  First, we moved a ladder close to the existing house so the birds could get used to it.  Then we relocated the house to the ladder at the same height – this was the riskiest step.  Finally,  we moved the ladder out of harm’s way a few feet at a time, making sure the house was always facing the same direction.

Hooray!  It worked!!!  The parents continued the regular feedings. And two days later we were ecstatic when the chicks fledged.