I’m a Good Guy
Snakes in Peachtree Park
If I Find a Snake, What Do I Do?
Georgia Snakes
When Hiking
Venomous Snakes Near Atlanta
Why Do We Fear Snakes?
References 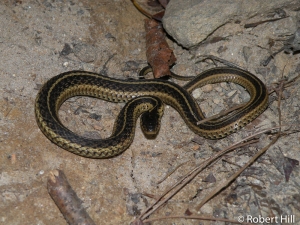 “Hi, I’m a non-venomous Eastern Garter snake and am very helpful to people. I eat the following pests:  slugs, mice, voles, grasshoppers, crickets and other insects.  I can also be eaten by these critters: birds, turtles, raccoons, and frogs.

There’s a cool fact about me: I can live up to 10 years.  Please consider welcoming me into your garden.”

Our friend and local snake expert Robert Hill gave us photos of several non-venomous snakes that we are most likely to see in Peachtree Park: 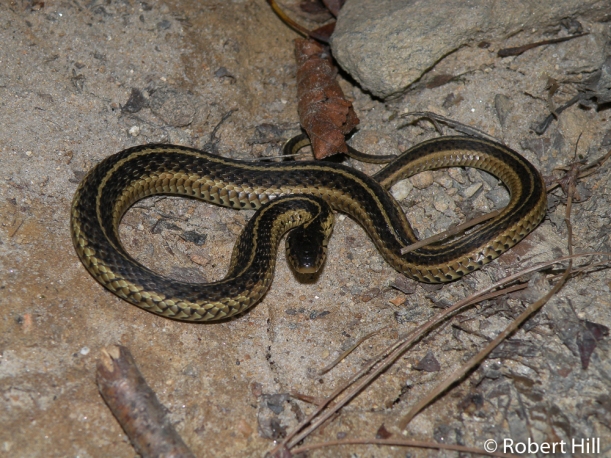 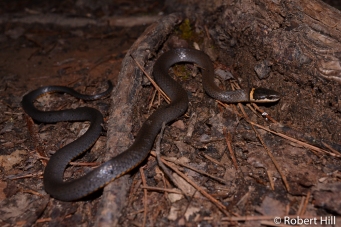 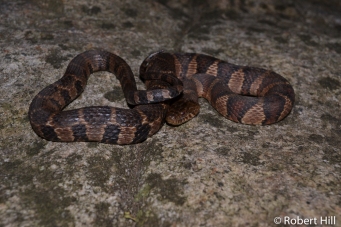 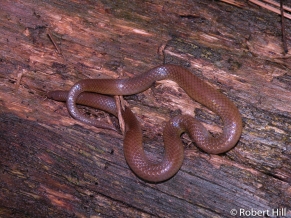 The Dekay’s Brown Snake and Northern Water Snake are the ones that are most likely to be misidentified as venomous.

There is one venomous snake that you are likely to encounter in Peachtree Park and it’s the Copperhead.  In fact, Copperheads are fairly abundant within the city limits. Here are three photos to help you recognize this snake (click the photo for larger images): 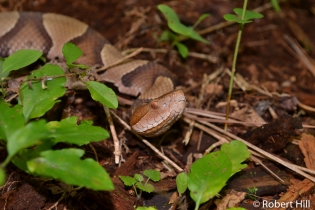 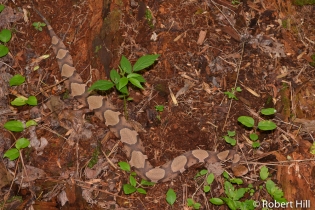 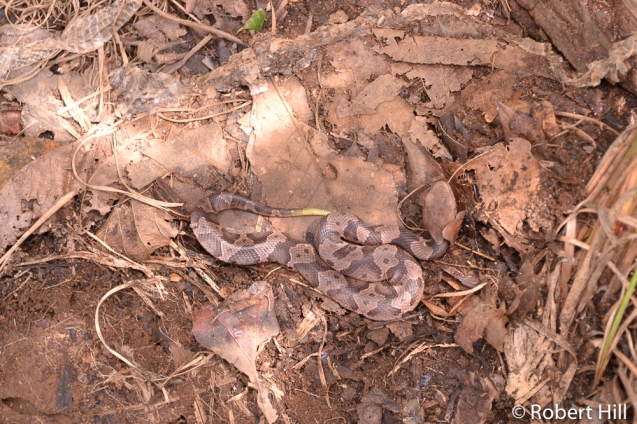 Small children and the elderly can be at risk from Copperhead bites and if you are bitten seek medical attention immediately. (Deaths from Copperheads are exceedingly rare. [1])

The Georgia Department of Natural Resources (DNR) has a good reference page on ‘Snakes of Georgia and South Carolina‘ [2].  On it they say Georgia is fortunate to have among the highest biodiversity of snakes in the United States with 43 species. Snakes can be found from the mountains of northern Georgia to the barrier islands along the Atlantic Coast.  Of these, 37 are non-venomous.

The DNR web page will point you to an excellent reference page [3] by the Savannah River Ecology Laboratory, which is run  by the University of Georgia.  The head of their outreach program is Whit Gibbons who is one of the authors  of an excellent book called Snakes of the Southeast [4] (Mike Dorcas is the other author).  We list it on our ‘Books We Like‘ page.

There are a few simple things to remember when hiking that will help keep everybody, you and the snakes, safe;

There’s more in a document from a UDSA document titled Snake Safety. [5]

The Cottonmouth comes to close to Atlanta proper, but stops just south of the city near Jonesboro and appears to the north again in Bartow county.

Timber Rattlesnakes are all but exterminated within the city limits, the closest population I know of being at Sweetwater Creek State Park.  I’ve heard of the odd sighting of timbers here and there in Brookhaven, but I haven’t been able to find any viable recent records.

The Pygmy has also pretty much been exterminated as well although up until fairly recently there was a viable population in northeast Gwinnett, however I think that population has completely blinked out. There are some still north of Atlanta in Cherokee county I believe.

Copperheads are obviously pretty much everywhere and are pretty abundant within the city limits.

Why Do We Fear Snakes?

Scientists have theorized that humans may have an innate reaction to snakes, which was vital for the survival of humankind as it allowed such dangerous threats to be identified immediately.

Aside from innate fear, people mostly worry about venomous snakes and the danger from their bites.

Scientific illustrator Liz Nixon made this info-graphic about venomous snakebites and gave us permission to use it.  (click on the graphic for a larger image).

At the bottom you can see that she gives credit for much of the factual content to a post titled ‘The Truth About Snakebite‘  from the blog Life is Short, but Snakes are Long [6].  Check it out; there is a lot of good information here and you’ll notice the blog author references Whit Gibbons and Mike Dorcas, authors of Snakes of the Southeast [4].