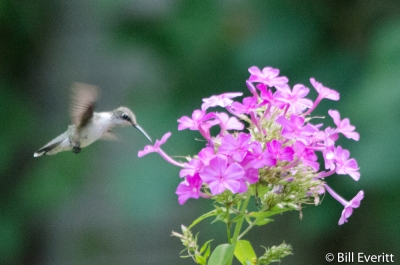 Everybody loves hummingbirds.  How can you not love them?   They are beautiful, tiny, fast, industrious and feisty.  If you are blocking access to the flowers they are after, these tiny little birds will buzz you and bark at you until you move.

The Ruby-throated Hummingbird is the only species of hummingbird known to nest in Georgia. However, a total of 11 hummingbird species can be seen here during the year: the Ruby-throated, Black-chinned, Rufous, Calliope, Magnificent, Allen’s, Anna’s, Broad-billed, Green violet-ear, Green-breasted Mango and Broad-tailed hummingbird. [1]

These birds weigh as little as a first-class letter. [1]  Their weight can range from 2 to 6 grams (0.071 to 0.212 oz), and the female is slightly larger than the male.   Hummingbirds have one of the highest metabolic rates of any animal, with heart rates up to 1260 beats per minute and a breathing rate of about 250 breaths per minute even at rest.  During flight, hummingbird oxygen consumption per gram of muscle tissue is approximately 10 times higher than that seen for elite human athletes.

Ruby-throated Hummingbird -on a fig branch

It’s a myth that hummingbirds don’t perch.  You may see one perching on your hummingbird feeder if you have one, and there is a photo on this page of a Hummingbird perching on the branch of a fig tree sticking his tongue out.

A female will build a walnut-sized nest without any help from her mate, a process can take up to 12 days.  Nests are typically built on a small branch that is parallel to or dips downward. The birds sometimes rebuild the nest they used the previous year. [1] 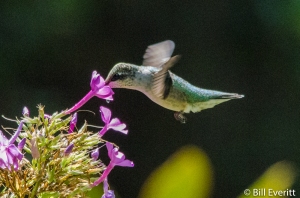 Data from Georgia’s Breeding Bird Survey show that the population of Ruby-throated Hummingbirds is stable and actually even increasing slightly. [4]  Perhaps that is in part because they are acclimated to urban yards and seem to do as well there as in the woods. [4]  Ecologically, hummingbirds play an important role in pollination of the flowers of numerous species of plants, shrubs and vines, some of which are specifically adapted to pollination by hummingbirds. [6]

Their migration movements typically coincide with the blooming of preferred flowers. [6] 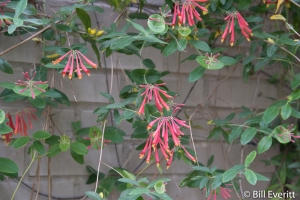 Ruby-throated Hummingbirds feed by day on nectar from wildflower blossoms and the flowers of many species of shrubs and vines.  Insects comprise a large percentage of the ruby-throat’s diet, and tree sap is consumed when available as well. [6]

Ruby-throats draw nectar from flowers by hovering, but will feed while perched if possible. Insects are taken by hawking and by picking them from sap wells, leaves, and bark of trees, shrubs and other woody plants. Sap is consumed from sap wells excavated in birch trees by Yellow-bellied Sapsuckers and other hole-drilling birds. [6]

With a little planning you can plant for hummers in a way that something will be blooming for them all year.    Hummingbirds are especially attracted to tubular blooms.   This is a partial list of foods that are important in the diet of the Ruby-throated Hummingbird. [6]