The Red-winged Blackbird is a favorite of ours.  There are year-round residents are here, but large migratory flocks descend to feed on remaining winter berries in February and March.  There’s nothing prettier than a flock of these birds on the wing with flashes of bright red as they fly.

The male red-winged blackbird is all black with a red shoulder and yellow wing bar, while the female is dark brown. [1]  The female is often mistaken for a sparrow. [2] 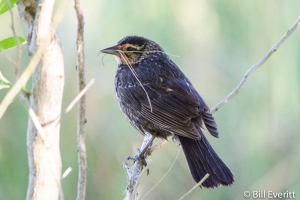 The common name for the red-winged blackbird is taken from the mainly black adult male’s distinctive red shoulder patches, or “epaulets”, which are visible when the bird is flying or displaying.  At rest, the male also shows a pale yellow wingbar.  The female is smaller than the male, which in not the case with most birds. [1]

The calls of the red-winged blackbird are a throaty check and a high slurred whistle, terrr-eeee. The male’s song, accompanied by a display of his red shoulder patches, is a scratchy oak-a-lee.  The female also sings, typically a scolding chatter chit chit chit chit chit chit cheer teer teer teerr. [2]   There is nothing like their calls when they are in a flock foraging on the ground or perched in trees.  It’s a wonderful sound. [4]

During the fall, populations begin migrating towards Southern U.S.   Movement of red-winged blackbirds can begin as early as August through October.  Spring migration begins anywhere between mid-February to mid-May. [1]