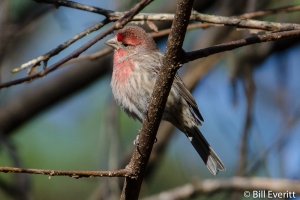 The House Finch is truly an intown resident and is perhaps one of the most frequent customers of our bird feeders.  They reside permanently here. [1]

Here’s an interesting story about House Finches from Cornell’s site:  “The House Finch was originally a bird of the western United States and Mexico. In 1940 a small number of finches were turned loose on Long Island, New York, after failed attempts to sell them as cage birds (“Hollywood finches”). They quickly started breeding and spread across almost all of the eastern United States and southern Canada within the next 50 years.” [7] 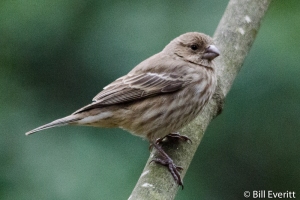 Cornell goes on to say that the estimates for house finch numbers in the U.S. are somewhere between 250 million and 1.4 billion. [7]  You might find this set of range maps showing their increase in numbers over time interesting. [6]

The male and female of the species look slightly different with the male having more red in his coloration.   In most cases, adult males’ heads, necks and shoulders are reddish.  This color sometimes extends to the belly and down the back, between the wings. Male coloration varies in intensity with the seasons and is derived from the berries and fruits in its diet. [1]

When most birds are feeding their young, they supply lots of protein in the form of insects, worms and the like.  House Finches are an exception however and feed their almost exclusively plant food. [7]