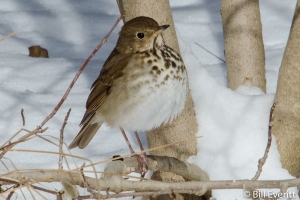 The Hermit Thrush is a visitor here in the Winter months;  the breeding range in the east is the northern-most states and Canada. [3]

The Hermit Thrush has a white-dark-white under wing pattern.   Adults are mainly brown on the upperparts, with reddish tails.  The underparts are white with dark spots on the breast and grey or brownish flanks.  They have pink legs and a white eye ring.  Birds in our part of the world are more olive-brown on the upper parts. [1]  The first Hermit Thrush we saw in our yard was initially mistaken for a Brown Thrasher.  However, with a closer look the differences became clear.

Their breeding habitat is coniferous or mixed woods across Canada, Alaska, and the northeastern and western United States. They make a cup nest on the ground or relatively low in a tree.

Hermit Thrushes migrate to wintering grounds in the southern United States and south to Central America but some remain in northern coastal US states and southern Ontario. [3]  Although they usually only breed in forests, hermit thrushes will sometimes winter in parks and wooded suburban neighborhoods. [1]

They forage on the forest floor, also in trees or shrubs, mainly eating insects and berries. [1]

The Hermit Thrush’s song has been described as “the finest sound in nature” and is ethereal and flute-like, consisting of a beginning note, then several descending musical phrases in a minor key, repeated at different pitches.   It often sings from a high open location. [1]