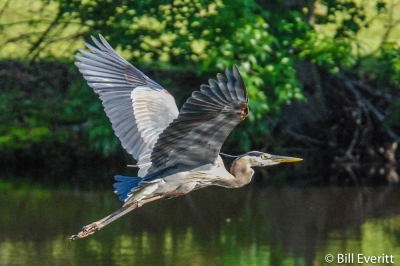 We’re very lucky to have a bird such as this visit yards in Peachtree Park. (see our post Look Who Came By For Lunch).  Even if you don’t see this bird in your yard, you can catch a glimpse every so often as one flies overhead.  A good spot to see a Great Blue is on the Nature Trail.  Pick a place where there’s open sky and you might observe one moving to and from the South Fork of Peachtree Creek.

They frequent places close by:  the Duck Pond in Garden Hills, Piedmont Park, Murphy Candler Park, and the aptly named Blue Heron Nature Preserve.  And there are several yards in this neighborhood with water which they will visit from time to time.  Watch out fish and frogs when they appear! 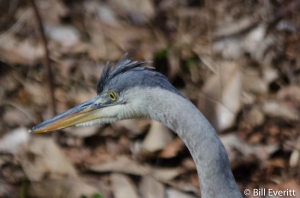 The Great Blue Heron was one of the many species originally described by Carl Linnaeus in his 18th-century work, Systema Naturae.

Great Blue Herons are magnificent, and they are huge.  If you are on the Georgia coast and see them next to Wood Storks or Great Egrets they seem to fit right in.  But here they tower above every other kind of bird, even the birds of prey.  It is the largest North American heron.  It has head-to-tail length of  36 to 54 inches, a wingspan of 66 to 79 inches, a height of 45 to 54 inches and a weight of 4.0 to 7.9 pounds.  This means that Great Blue Herons are roughly twice as heavy as Great Egrets , although only slightly taller. [1] 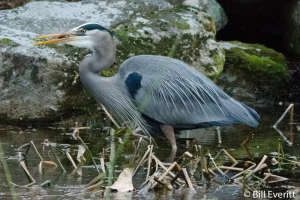 Great Blues are very stately and their moves are slow and deliberate.  But when they strike out at prey, the speed is blinding.  Herons locate their food by sight and usually swallow it whole. They have been known to choke on prey that is too large. [1]

The Great Blue Heron in the video below landed in our back yard and went fishing for quite some time catching goldfish and a few frogs.