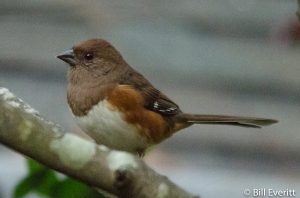 What a beautiful bird is the Eastern Towhee.  The male and female are different in appearance:  the male has a black head, chest and wings while those female parts are dark brown.  Both have rufous sides, but the belly of the female is white.

They are medium sized sparrows and spend much of their time rummaging in the leaf litter for food.  When foraging on the ground Eastern Towhees use a scratching technique where both feet kick back simultaneously.  Eastern towhees eat seeds and fruits, several invertebrates, and occasionally small amphibians, snakes, and lizards. [2]

Because they spend so much time on  the ground and in the shrubbery, they are sometimes hard to see.  If you open your windows, you can hear them rummaging about during the day from early morning to dusk.

They have a very distinctive call that sounds like drink your teeeeea. The name “towhee” is onomatopoeic description of one of the towhee’s most common calls, a short two-part call rising in pitch and sometimes also called a “chewink” call. [2]

They nest either low in bushes or on the ground under shrubs. Northern birds migrate to the southern United States. Breeding begins in spring and continues to late summer. Eastern Towhees nest as early as late March in Florida and Georgia, in mid- to late April in some midwestern states, and as late as mid-May in northern New England. [2]