Randall Roberts and Anne Marsden are beekeepers who live in Peachtree Park and are keeping bees right here in the neighborhood. Here is their story as told by Randall.

Randall (left) and Anne checking one of their hives

A few years ago my girlfriend Anne approached me about the plight of honey bees. She had just heard or read about a phenomenon called “colony collapse disorder” that was inexplicably killing off honey bees around the world and she found it disturbing. We then learned together that bees pollinate a large portion of the world’s food crops as well as flowers and trees, the situation seemed dire. She asked me if I had ever thought about keeping bees. I thought, no, I never had, but it did seem like an interesting thing to do. I didn’t have a big aversion to bees, just your normal don’t bother them and they won’t bother you type of coexistence.

Our research taught us that the amateur beekeepers were helping out with the total population of bees and they didn’t suffer as much “collapse” as the commercial beekeepers. Commercial beekeepers move hives around by the hundreds and are hired by farms and orchard owners to pollinate their crops. These are where we hear of the colony collapse the most and there is a great deal of research going on to determine if pesticides or genetic modification are impacting these bees.

And then it hit me, Anne has an ulterior motive, she absolutely loves honey!

After she first gave it voice, we bounced the idea around for a few months, talking with friends and reading up on the situation of bees dying off in greater numbers. I was scrambling for a birthday gift for her that year and decided to see if there was anywhere we could go to take a closer look at the hobby of beekeeping. We found a gentleman south of the city that was giving a class on beekeeping at his farm so I signed us up. I ordered us each a veil and pair of gloves and announced to her on the morning of her birthday that we were going to “bee school”. We had such a wonderful time that we immediately started the next phase of becoming amateur beekeepers, where do you place the hives? 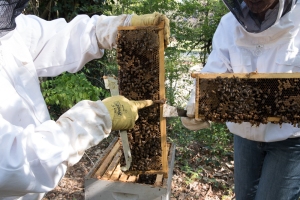 Randall is pointing to the Queen

We told just about everyone we came in contact with that we intended to become beekeepers. Finally at a party we met a couple that had an unused third of an acre in their back yard. They had been told by their gardener that they should keep bees back there. We decided together that Anne and I would do the installation and most of the work but the costs and the honey would be split between our two families. The adventure had begun.

Over the next few years we’ve had hives in up to three different locations; on top of roofs overlooking Piedmont Park, in our friends’ back yard and on the edge of our own neighborhood in Peachtree Park. We learn something new just about every time we open up a hive. We’ve learned that there are many threats to bees these days and colony collapse probably has several causes. There are mites that latch on to the bees in the hives, hive beetles that have somehow come over from South Africa to infest the hives, and other inexplicable ways a hive can be lost.

We lose up to half of our hives each year. The bees can starve if you don’t leave them enough honey at the end of the season. A hive can become overrun by pests in which case they will leave (swarm) to find a new home, and sometimes it’s as simple as a queen swarming or dying and the new queen never takes hold. We are still quite amateurish in our efforts so we don’t always know what happened or what we should do next. We feel a great responsibility, that we are not all that well prepared for, but overall we get great satisfaction for trying to do our part for the local ecology. Besides, we now both really like honey.

The short video below shows the honey bees at work.  If you look closely you’ll see a few bees and insects that do not look like honeybees.  Randall says “…it’s common for other flying insects and even bees from other hives to try to steal honey.  That’s why they have sentry bees.”