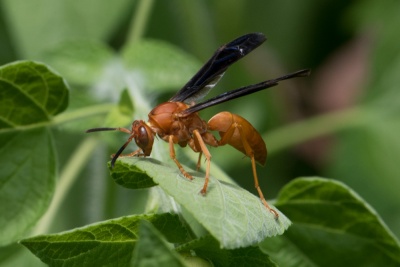 Me either.  Wasps and yellow jackets have always screamed ‘run!’ to this southern boy.  And finding out I was allergic only underscored the drive to avoid them at all costs.   I mean, just look at this guy (yes, that’s a stinger).  Get the broom!  Get the spray!  Get away!!

Not so fast Buckwheat.  A new way of thinking about these lifelong harbingers of fear has wiggled its way into my thinking.

There are two kinds of wasps:  parasitic wasps and stinging wasps.  This is only about the stinging kind; we’ll write about the parasitic wasps in a future blog.  The picture here is of a Red Paper Wasp, most likely Polistes carolina. These as well as mason and potter wasps and the aggressive hornets and yellow jackets belong to the family Vespidae (from the Latin word for wasp). 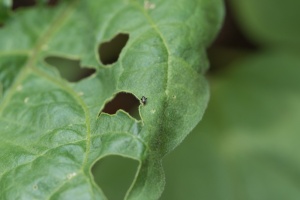 Leaf beetle on an eggplant

So what’s the good news?  For one thing, they leaf eat leaf beetles like the one that just ate those holes in our eggplant (you can see the likely offender in the photo).  They’ll patrol your vegetables and flowering plants and are so efficient that they do natural pest control.  Plus, they aren’t interested in you and are not aggressive unless provoked.

Xerces also has a good page on Paper Wasps.

note: this post was  modified on January 28, 2017 to remove links to sites that are no longer vaild